Millie Bobby Brown (born 19 February 2004) is a British actress. She rose to prominence for her role as Eleven in the Netflix science fiction horror series Stranger Things (2016–present), for which she received Primetime Emmy Award nominations for Outstanding Supporting Actress in a Drama Series. Her film debut came in 2019 with the monster film Godzilla: King of the Monsters.

In 2018 she was featured in the Time 100 list of the world's most influential people and is the youngest person to be appointed a UNICEF Goodwill Ambassador. 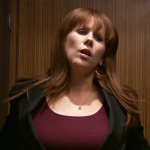